Shale Gas and its impact on Turkish Economy 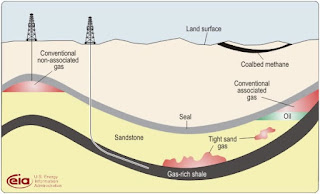 Shale gas is basically natural gas. Only the thermal calorific value is a bit low. Shale gas production is same as Natural gas production by non-traditional, non-conventional method. The soil structure "thin-bedded, rich in organic matter", is suitable for producing oil and gas is called "Shale".

"Shale Gas" is the method of taking the Natural Gas which is trapped between the deep underground rocks. Shale Oil (Shale Petroleum) are removed by the same methods. ShaleGas and Shale Oil production technology are not new practice. Since 1947 there has been market practice in the United States.

Soon, the US will build large number of LNG terminals and become one of the world's largest gas exporters. Rich Shale Gas sources will change the world gas market prices and balances. Traditional natural gas deposits are found in separate volumes of crude oil or on crude oil reserves. Shale Gas is the volume of natural gas trapped in impervious soil rocks.

"Horizontal Drilling" and "Hydraulic Fracturing" have gained economic value with the development of the Shale gas producing technology.

Existing natural gas reserves produced by traditional methods suffice for the world's needs of about next 60 years. With Shale gas to be produced by non-conventional methods, this period is extended up to 250 years.

China has 1.275 Trillion cubic feet (Tcf), US 862 Tcf visible reserves, it is estimated that Turkey has 15 Tcf Shale Gas reserves.

Horizontal wells used to drill for Shale gas in environmental technologies inevitably affect the nearby wildlife. The fluid used during well excavation and hydraulic cracking consists of 98% of sand and surface water, and the required contribution of 1-2% consists of chemicals that will reduce friction during soil excavation. It is not possible for chemicals to contaminate groundwater if appropriate technologies are used in deep underground hydraulic cracking. Because the depth of sand and chemicals is about 3000 meters below ground, far below the depth of the deepest underground water. Much quantity of fresh water (about 15-20 thousand m3) is needed during the excavation of each well.

We estimate that Shale Gas may be found in Southeast Anatolia and Thrace region in Turkey. There is no visible reserve yet proven. It is necessary to open large number of wells for visible-proven reserve figures. It is not possible to reach a quick result quickly with 1-2 drilling wells, that is not true.

The rapid increase in natural gas prices at international spot markets, the decline in production from existing sources, the natural gas depletion, the reduction of traditional natural gas resources that are easily accessible, and the new developments in Shale gas production technologies have increased the investment appetite for Shale gas.

This is the current price at Turkish border as they have not sold it to us under the price they sold to Europe. As long as natural gas is needed, the prices of natural gas will increase.

Hydraulic Cracking method for Shale gas was introduced with the legal regulations of the US norms and legislation. US Shale Gas production was 14 Billion Nm3 in 2005 and 241 Billion Nm3 in 2011. In 2010, 15,467 wells were opened in the US. There will be more encouragement in this regard during the presidency of Donald Trump.

For Shale gas production, 3000-3500 meters depth in the well before the rock excavated for the production of Shale gas, then it is necessary 1000-1500 meters of horizontal drilling. During the horizontal drilling, chemical liquid and sand are pressurized, then underground layer cracking is made in 20-30 different points. 40-50 meter underground layer is cracked in each crack, then ShaleGas which is emerging is collected from these cracks into the well.

The sand that is added to the water (or liquid) that keeps the formed cracks open. Shale Gas production wells can be opened at intervals of about 500 meters in between. It is estimated that the approximate USA budget price for each Shale Gas production drilling well is between US $ 200-500 thousand.

We also should consider the environmental risks of Shale Gas production technology. Because of the high pressure liquids used in deep soil drilling, local small earthquakes can occur, which may trigger big ones.

There is also a risk that chemicals may interfere with drinking water when cracks occur at shallow depths. We notice that 25-75% of the water injected into the ground is returned to the surface. Returned dirty water is dangerous which may contaminate domestic use water, and if serious checks are not carried out, return dirty water may cause environmental pollution.

With the US natural gas to add up Shale gas production, it can affect world gas prices, but we do not expect that prices will fall much in short term.

Because in the US, the trend towards gas fired thermal power plants began instead of coal-fired power plants.

The coal-fired power plants are shutting down, more combined cycle power plants are commissioning to use more Shale gas. The Shale gas quantity to export is limited. The average cost per new well to be opened in the US has increased. Now, with the average production cost of ShaleGas is over US $ 7 per MMBTU, new wells do not have the economic features.

Do you have Shale Gas in Turkey? We guess, yes it exists, but we do not know how much yet. We have not yet drilled a significant number of reliable results.

Even if we have reserves, it will take at least 8-10 years to find and exploit it and use it on the market. Significant investments are needed to transport gas in order to reach the market from the production well of ShaleGas. Our ball-park guess is that the Shale gas we produce will reach consumers at a price that is not less than $ 300 per 1000 cubic meters.

We need to set up organizing shipyard zones that will be able to produce off-shore platforms for overseas off-shore searches in places such as search- drilling technologies, improvement of drilling rigs, increase of R&D studies, in shipyards such as in Istanbul Tuzla, İzmir Aliağa, Antalya, Mersin.

During Donald Trump's US presidency, that is to say, over the next 4-8 years, the production of Shale Gas will increase, gas prices will decrease, conversion to combined cycle power plants and more gas consumption are expected. First of all, it will occur in the US and then in other countries with relatively low prices, natural gas will be replace coal.

Coal will be sold more cheaply at international markets. Carbon emissions and water vapor will increase the greenhouse effect. Due to energy policies of President Donald Trump, Renewable energy investments will unfortunately be reduced first in the US, then perhaps all over the world. Global warming will eventually increase. Turkish current account deficit will be even greater if we do not care about.

posted by yuvakuran at 6:52 AM 0 comments

We entered the "Komische Oper" in Berlin on Friday night, March 31, 2017 at 19:00. We showed our internet tickets in paper print at the door. We left our coats at lobby. We found our places, we were seated. The audience population consisted mainly of middle-aged people. More reasonably priced back seats were filled with young people. A digital translation service was provided on the small screens behind the seats. You could follow English French Russian and Turkish translations as you wish. Light white wine, beer and other alcoholic beverages were served at the lobby bar.
The opera building was completed in 1896. Opera had repertoire with musical performances of German operettas for many years, initially with a total capacity of 1700 spectators. At the end of World War II, the opera house was bombed and turned into a ruin. Then the house was on the east side of Berlin. It was repaired after the war. There have been many repairs to date. The orchestra venue has been enlarged. Today 1200 spectators can enjoy the music at the city center. It is a pleasant large comfortable space. The other two operas in Berlin are playing classic works.
The original work was in French but was played here in German. There was an occasional English-Spanish dialogue. The staging was very different and new. Intermediate cinema projection images were used. The "Biutiful" movie (Javier Bardem) poster was hanging on the left pan which was uploaded with a special message.
The director (Sebastian Baumgarten) had brought the Opera to the East Berlin location of the 1950s. The soldiers in the original were gone, now we had the male macho staff of the "Santander" supermarket. The rear-end looked like mass housing of the East German era. The hot women who work at the supermarket had come to the scene.
Carmen (Karolina Gumos) had stabbed her opponent other woman. She was seducing the small rank corporal Don Jose (Timothy Richards) in the US army.
In the second stage, the with same background, a nightclub emerged. There were Karl Marx, Lenin show puppets around for demonstration on the third stage. The final stage was at the entrance of the arena where the bullfights were held. At the end there was an unpleasant rape and murder scene. There were four stages and one pause.
There was a flamenco show between the curtains with two guitars and a female dancer. Toreador Escamilyo character was performed by a Turkish opera singer (Kartal Karagedik). We watched the opera delightfully in the spacious, high-ceilinged, comfortable armchairs.
While leaving the Opera house, at the exit gate, we got our little chocolate packets as courtesy. Most of the viewers got on their bicycles and pedaled to their homes. We got to Alexander Platz by T100 bus, then we reached our house by U5 metro. It was a lovely evening.
---
Haluk Direskeneli, is a graduate of METU Mechanical Engineering department (1973). He worked in public, private enterprises, USA Turkish JV companies (B&W, CSWI, AEP), in fabrication, basic and detail design, marketing, sales and project management of thermal power plants. He is currently working as freelance consultant/ energy analyst with thermal power plants basic/ detail design software expertise for private engineering companies, investors, universities and research institutions. He is a member of ODTÜ Alumni and Chamber of Turkish Mechanical Engineers Energy Working Group.


This article is written for the "METU Alumni Bulletin" magazine.
http://www.odtumd.org.tr/
Berlin, 2 April 2017