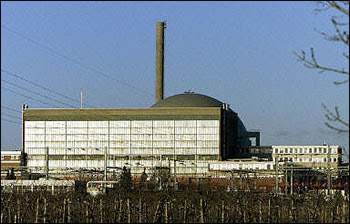 Your writer was in Hamburg Germany during Noel week. He had the opportunity to visit the Stade nuclear power plant site. Belowgiven short note is prepared through various resources. Plant is a good example of nuclear plant demolition.

Stade Nuclear Power Plant is in Germany close to city Hamburg, whose 66.7% shares are owned by E.On and the remaining portion is owned by Vattenfall. German E.On company is the operator. Plant construction was initiated in year 1967, commercial operation started on May 19, 1972 and ceased operation on November 14, 2003.

The Nuclear power station Stade (German: Kernkraftwerk Stade, KKS) operated from 1972 to 2003 in Bassenfleth close to the Schwinge-river mouth into the Elbe river. It was the first nuclear plant shut down after Germany's nuclear phase out legislation and is currently undergoing the decommissioning process (Phase 2:Deconstruction of larger modules in the containment building.

The station is located at the left bank of the Elbe next to the city Stade, to the west of Hamburg in Lower Saxony beside another shut down power station Schilling. The KKS was based upon a light water reactor.

The power plant was built by the Siemens company and started operation on May, 19th, 1972 shortly after having reached the first criticality on January, 8th, 1972. Between March, 1972 and November, 2003 the KKS supplied electrical power of 662MW (internal) resp. 630MW(external), as well as 1892MW thermal power. Until September, 7th, 2005, the power plant ran in "post-operational" mode, since then it is in "residual" mode.

During the 31 years of operation, 157 fuel elements have been consumed, since December, 15th, 1988 also fuel elements containing 4% uranium. Since 1984, the nearby saline has been supplied with process steam. This was the first supply of thermal energy by a nuclear power station. On Friday, November 14, 2003, at 8:32 a.m. the Stade nuclear power plant has been shut down. The operating company E.ON officially assigned economical reasons, however, Germany's nuclear phase out act of 2000 surely provided also a political motivation.

Deconstruction. The power plant deconstruction is divided into 5 phases, which shall be completed until 2015.

Phase 1: Deconstruction of machinery and parts, which are not required for "residual" operation. Preparation of further steps and infrastructure.

Phase 2: Deconstruction of large components in the containment building

Phase 3: Deconstruction of the pressure containment building and the biological shield

Phase 4: Deconstruction of the remaining contaminated parts. Proof of absence of contamination. Release of remaining structures out of governmental nuclear supervision.

On April, 27th 2005 the last fuel cells have been moved away from the KKS. Nevertheless, the department of the environment of lower Saxony authorized storage of weak nuclear waste until 2046.

Consequences- After shutdown of the Stade nuclear power plant, the operation of the nearby saline has been shut down also. Only a few years after (2006) the nearby aluminum factory was closed because of too expensive electrical energy. Also, lots of small supplying companies got into trouble.

Meanwhile it is planned to construct a black coal power plant with almost the same power as the KKS. This requires extension of the harbor of Stade-Bützfleth with a coal terminal for 1.7 million tons of black coal.

posted by yuvakuran at 9:58 AM 2 comments