Since the purchase in 1996, the new owners had introduced an $800 million rehabilitation program to upgrade the plant. They paid $85 million for new dust collectors and stack sulfur retention (flue gas desulphurization, FGD) installations. It is our fair estimation that they should be paying more than $200 million for adequate environmental equipment. The money spent for rehab was not enough for the necessary environmental protections.

Today Hazelwood is still on the list of the world’s most polluting TPPs based on CO2 emission per generated kW-hour electricity. The desired environmental emissions figures have not yet been fulfilled. However, the plant has received extensions for the rehab period and was also granted an extension to operate until 2030. Had the plant not been privatized it was scheduled for closure in 2005 because of the huge, ongoing air pollution as well as water and land pollution.

Hazelwood TPP is built next to the Morwell open-pit lignite coal field. On 20 January 2014 an underground fire broke out in the Morwell coal field and lasted for 40 days. The air was highly polluted; the town of Morwell was evacuated. Huge environmental disaster occurred in the area. If there is a malfunction, a fire, an explosion, a breakdown, or an operational stop, there is always a human reason, some human negligence. As there is an underground fire in Morwell, there was some human negligence or error behind this disaster.

Which TPP's are the most air polluting in the world?

Here is the list of the world’s worst CO2 emitters per kW-hour as of 2013, based on the recent environmental report released by the EU Energy Commission:

Which TPPs are Germany’s worst polluters?

From the same report:

It is difficult to understand why the West Niederausse plant, which was an example of the latest technology, is in this worst-polluting plants list. Niederausse has received the "worst polluting" plant title due to its relatively high CO2 stack emission per kW-hour electricity generation. One could argue that in Germany, stack emission requirements are lowered to such levels that it justifies the incredibly high subsidies applied to renewable energy investments.

We have Afsin-Elbistan-A and Tuncbilek TPPs on the list of the world's top 100 worst polluting plants. In Turkey, the public authority adopted the "Large Combustion Plants Directive" (BYTY for short in Turkish) in 2010, with low emission requirements with which all high-capacity thermal power plants must comply. State-owned thermal power plants are under no emission or pollution obligation to comply with these directives until 2018. This period will be extended another three years.

Most of the coal-firing power plants in Germany under new European emission norms are not better than our plants in Turkey. We know that 40% of electricity production in Germany today is provided through domestic coal. German TPPs are burning coal with dust filters initially designed too small to meet the new norms. Most of them had no FGD systems to stop sulfur emissions.

Investors have no incentive to put more money into rehabilitating old power plants, since there is no return on investment. On the other hand, it is more rational to put money into renewable technologies, as the money creates more employment, more production, more export goods, and in the end creates clean energy without pollution. Power plants are sold to private investors, with the expectation that the new owners would invest money in rehabilitation, comply more to the new, strict environmental norms, and further reduce stack emissions. However these expectations were not fulfilled.

The owners asked for another time extension for rehab investments; they were reluctant to invest the money necessary for new bigger environmental equipment. They almost blackmailed the regulatory authority by warning to shut down the plant, threatening not to feed electricity to the national grid.

Since there is no return on rehab expenditures for old privatized power plants these expenditures are only made through regulatory or legal force.

German plants with poor environmental records are on the Polish border in the east or on the French border in the west, where most of the prevailing wind blows toward neighboring countries. So German citizens are less affected by the flue gas emissions, since dust emissions from stacks move to neighboring countries where people have no recourse. In Germany, dirty thermal power plants are in operation in remote lands far from cities, far from monitoring environmentalists.

In almost every part of the world private investors receive political support in their new power plant constructions. Local people on farm lands were the victims of these policies. Land, air, water, river, and sea environments were highly polluted. Brazilian rainforest has been heavily damaged. People in nearby agricultural lands that had high expectations for local employment were cheated. They lost their land and their environment. Trust was lost. Local resistance in every nearby community started organizing to stop or legally block any new power plant investments.

Thermal power plants are designed to fire the coal of nearby open-pit fields. However, it is recommended to eradicate the non-combustible substances such as rocks, stones, and soil—something that can be accomplished through simple eye screening and hand picking for selection and extraction. This procedure greatly improves operation and reduces breakdowns, stops, and unnecessary emergency repairs.

In the past, coal was fed into the coal mills at the Soma thermal power plant as received, without extracting rocks and stones. The average calorific value at the inlet of the combustion chamber was less than 1900-2000 kCal/kg, much less than boiler design figures.

Inflammable materials, rocks, and stones were fed into coal mills, pulverized, and fed into the combustion chamber but could not be burned since they have no calorific value. They were released from the stack as fly ash particulates, were not captured by small dust filters, and increased nearby air pollution. The bottom ash increased, was fed into the ash dam which then had a much shorter life span than expected.

The Soma TPP then employed unqualified labor to screen (by hand) inflammable rocks and stones at the conveyor exit from mine fields, to increase the calorific value to the2500-2800 kCal/kg range; efficiency was increased, availability was also increased. The load on coal pulverization mills was reduced, internal energy consumption was reduced, as was less fly ash, less dust, fewer emissions, and less bottom ash, and performance was improved.

We all wish that our coal facilities were equipped with water floating (lavuar) systems to clean the coal and separate it from the non-combustible rocks and stones. So we create higher calorific value coal to feed into combustion chambers so that we operate boilers more efficiently and with fewer failures, less fly ash, and less bottom ash.

Following the assets sales by private operators, power plants are expected to begin large-scale rehabilitation with better instrumentation, bigger dust filters, and more effective sulfur capture. However, they are not.

Buyers are generally reluctant to put money toward plant rehabilitation. They do not want to put money into bigger and better environmental equipment, which are known not to generate returns. They want more time extensions for such investments. They operate old plants at maximum capacity while polluting the environment, generating electricity, selling to the grid, and earning money.

We have power plants with long proven successful operation with available local coal. They are designed  in direct or indirect pulverized coal firing or in circulating fluid bed (CFB) combustion designs.

As a result of the brutal competition in the public auctions of the plant sales, the emergence of too high prices, the initial owner of the property (privatization authority), can be named very successful.

Though proposals are expected to cover concrete rehab programs upfront, they are unfortunately unfulfilled in the end.

New owners prioritize earnings and repayment plans, but they avoid rehab and renovation expenditures. Environmental sensitivity over the medium and long terms as well as economic goals concerning the well-being of society are not allowed. That tendency is everywhere.

Our access to primary energy resources may be negatively impacted by our sensitive geography and evolving political events. Domestic lignite sources are to be exploited in more and more efficient new thermal power plants. It is essential that energy generation increases.

What experience have we gained from these observations?

We feel that it is wise to demolish old, degraded thermal power plants, sell them for scrap, replace them with new and better efficient plants of cutting edge design and the latest technology that can be manufactured domestically. In the long term, building a new modern power plant is cheaper than to purchasing an old plant and trying to rehabilitate it. With the new, modern, higher-efficiency power plants, we shall have better availability, better efficiency, and optimal compliance with the expected EU environmental norms. 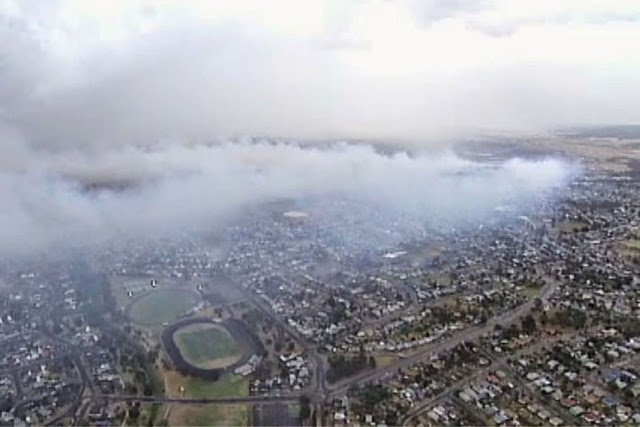 posted by yuvakuran at 7:15 PM

Interesting article. Could you please send/post a link to the source of the power station emissions intensity data? I did a bit of searching but couldn't find anything.